OK
Shrewsbury Honda Centre uses cookies. Some may have been set already. Read about our cookies.
Please click the button to accept our cookies. If you continue to use the site, we'll assume you're happy to accept the cookies anyway.
Home → New Motorcycles → Adventure → CRF1100L Africa Twin

It’s been over three decades since the Honda XRV650 Africa Twin first rolled into Europe and while the motorcycle that now bears its name – launched in 2016 as the CRF1000L Africa Twin – was a brand-new machine from the wheels up, it fully inherited the essence and spirit of what made the original so popular.

It was the balance between power and weight that was at the heart of the original bike’s appeal, just as it was for the new model. With its unique, athletic appearance, an enjoyable, usable engine and capable, comfortable chassis, the CRF1000L Africa Twin proved itself a true modern-day all-rounder and has been hugely popular with round-the-world adventurers, around-town commuters and weekend tourers alike.

Building on strong European (and global) demand for both models, with over 87,000 sold worldwide since its 2016 relaunch, 2020 is set to be a landmark year for the Africa Twin.

The touring comfort, technology and ability of the new CRF1100L Africa Twin Adventure Sports* are further enhanced – and it adds the option of Showa Electronically Equipped Ride Adjustment (SHOWA EERA™). Meanwhile, the CRF1100L Africa Twin itself is comprehensively redrawn with an aggressive, compact rally style and even sharper off-road focus. It also packs more power and torque and is significantly lighter – in keeping with the first principles set out all those years ago. 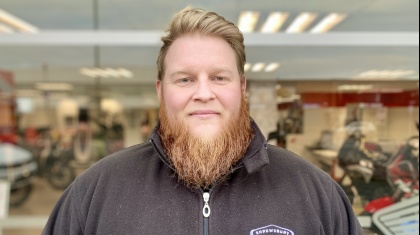